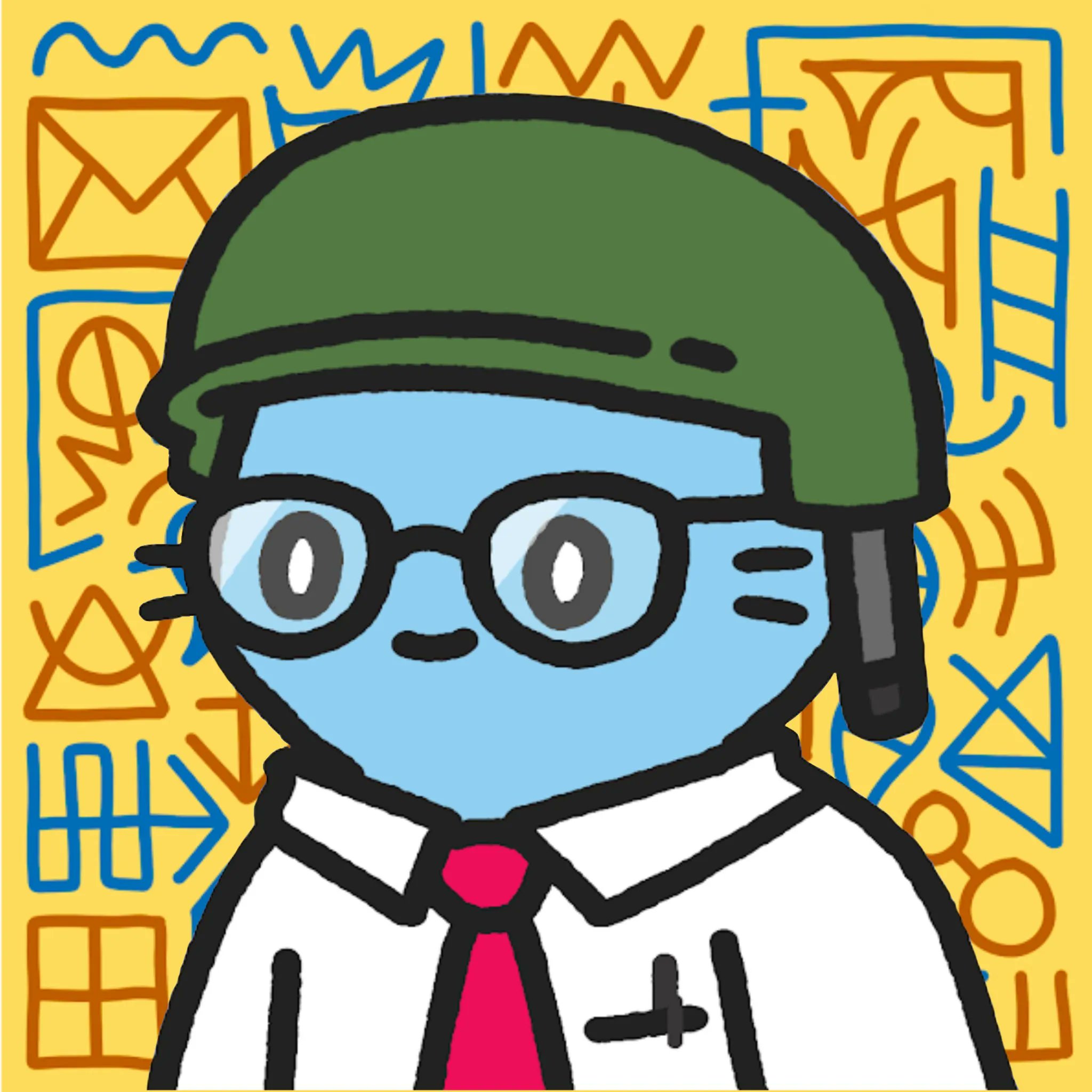 The first thing that comes to mind is that U2 is a terribly overrated band.

Jokes aside, when it comes to this space, I think maybe one contrarian idea I hold is that all PFPs could go to zero with the thesis being that for 30 years of the internet we didn’t pay for avatars for internet platforms - we just right-clicked and saved them. However, in the last 2 years it’s been an “arms race” of sorts to pay top money to “flex” and use expensive avatars for Twitter. So, my thesis is that perhaps we may migrate back to using free, right-click save avatars.

Another thought is that in the near future we will stop using the dominant crypto social platform Twitter. So the question is what will happen if we all migrate off of Twitter and move to some other platform that has more of a gallery view of our wallets and we don’t emphasize a single avatar anymore. It happens a lot in fashion, products and styles. One decade embraces tight clothing and the next decade is the opposite; or cars are round and bubbly, and another decade they are boxy and hard lines. Styles and sentiments change and often push back against the previous ideas. Again, I’m not saying this will happen. I just like to think more macro and long-term about playing ideas out and our current NFT ideas are so short term, since the space is so new - we simply don’t know.

What should someone new to web3 need to know or learn about it?

As exciting as this space is and as fast as it moves, it’s important that people slow down and take the time to understand the lay of the land. What I mean is the terminology, the people, the projects, the functions.

Further, I think that there is too much of a binary comparison between web2 and web3. web3 has yet to be defined; it’s simply the next iterative ideal and people are using it far too frequently and far too confidently. In fact, people often just use the word web2 as a derogatory term as though nothing positive came out of web2 or that we might not have a north star of how we want web2 to be if we didn’t have the blueprint or shortcomings from web2 to determine what we wanted to fix. I remember web1 and the idea of web2 was equally exciting and liberating back then. As for web3, we are creating and defining it now. It’s not an ideal, but something to strive for. As for some other quick pointers:

How does it feel to be the community manager for Isaac “Drift” Wright, one of the most successful NFT artists of the moment?

It’s incredibly fulfilling to be a part of Drift’s team and to play a small role in his successes and illuminating his story. He’s accomplished so much in this space, in such a short time and I think he embodies the possibilities of this space - an artist owning their work, an artist sharing their story and also connecting and inspiring so many people.

Specifically about Isaac, I would encourage more people to actually take the time to learn of his struggle, read the articles and understand him and his entire story. I am still surprised daily that people don’t even know that he was incarcerated (or why) but mostly just know him as the “Vans shoes - Vibe Check guy.”

Yes, he’s an Urban Explorer and a photographer but that’s really just 1% of what makes Isaac so amazing.

You are also the founder of an agency, STOLEN, which is dedicated to helping contemporary artists like Efdot and Cat Russell. Can you tell us a little more about it?

Sure, STOLEN is a talent management and promotions agency.

For us, the name STOLEN means “stealing attention.” That’s our goal everyday, especially in an environment where the louder you are, the more you tweet, the more you post, the more people hear you.

So much of Twitter is noise. I spent my younger years playing (poorly) in punk and hardcore bands. I was always around art but I never considered myself an artist. That said, I knew I could still participate in this space and so I brought over and translated my IRL talents to this space and founded STOLEN. It’s the vehicle that supports artists and their goals and I’m so proud of what Efdot and Cat Russell and Joey the Photographer have accomplished.

They have so much more talent to share - Cat Recently sold out his Otherworlds collection in less than 24 hours. The cool thing about Otherworlds is that holders will keep getting all these airdrops and rewards and stuff - it reminds me of what Ghxsts or Jake the Degen do and I love both those artists and love their methods for creating and rewarding strong communities.

And Efdot has just been crushing it - I mean, he’s had all these wild collabs with these insane global brands like Nike, the New York Knicks, the Chicago Bulls and the USA National Skateboarding Team (the Olympic Skate Team) - it’s so wild!

And Joey the Photographer (aka Joey Miller) recently joined STOLEN and has fit right in! His photography is absolutely stunning and the hours and hours he spends making each one perfect. Sheesh. Ha - as a matter of fact, he recently sold a beautiful 1 of 1 photo to DrifterShoots!

The best decision I ever made was jumping on a DeezeFi Twitter Spaces in Spring 2021. After that, I was hooked on listening to his Spaces. He taught me so much about this Space - he’s impacted more people than you can count.

The worst decision I made was despite reading about and watching NFTs, that I took too long to actually dive in and get started.

Which soft & hard skills have been most helpful in the web3 ecosystem?

Oh man, great question! I’m a little skeptical that web3 is a “defined thing” yet, to me, it’s still being defined while it’s being built and it’s barely been built. web3 is more of a hazy point on the horizon than something that’s fully built.

Anyways, as for soft skills I think curiosity and critical thinking are the two traits that can help people be successful in life and so certainly they would help in web3. Also, the ability to be proactive - that’s always in demand.

As for hard skills, it’s largely a matter of understanding web2 Social Media platforms like Twitter, Discord, etc. Also, a fundamental understanding of the major blockchains and their value propositions is helpful. Each of them was built in a certain way to differentiate themselves. Time will tell which builds people prefer and why, but understanding each chain is important instead of simply making comparisons to the Ethereum blockchain.

The most challenging part of my job(s) is that the crypto/NFT space never stops - it’s 24/7. And so the twitter, discord, email, texts come from all around the world - so it’s truly 24/7.

The best part of my job is getting to work for myself, building out a company that helps artists realize their artistic visions - people who are as obsessed with this space as I am! I love watching the artists get excited by executing the path we’ve laid out for them. I love the community’s reactions and their support. It’s a real blessing to do what I do.

When I read about the internet boom of the 90s, I thought I missed the boat and wouldn’t have an opportunity to partake in one of the greatest industrial revolutions and then, boom, crypto and later NFT’s came to light. However, with crypto, I wasn’t a computer coder, so I still wasn’t able to immerse myself in it. All that changed with NFTs. My IRL skills and experience with marketing, promotions and business development are something that many artists aren’t good at or hate to do. My skills allow me to work with talented creatives, in a space that means a lot to me. Crypto literally changed my life. I’m so glad to be here with all of you.

Of course, the projects/artists I work with are among the most talented in the space.That said, one of my favorite projects is the first project I purchased which are an early, killer ArtBlocks collection titled Divisions by Michael Connelly. I had the good fortune to collect the matching, signed prints from Michael to hang on my office walls. Every time I look at them, I’m reminded of this incredible journey. They remind me of how far I’ve come and how far I have to go.

What is your vision for the future?

I am excited to meet new artists and find ways to support their growth. I love the possibilities of the space and even hope to join them one day in creating and sharing art. In fact, I recently purchased a Fuji XE-4 and was learning composition, lighting, etc. I take it with me when I travel and have some free time to explore. It’s something totally new to me, as I was not really a picture taking kinda guy. There are so many moments in my life that I didn’t document and so even to have some more photos going forward would be really nice.

What is missing from the web3 ecosystem?

I think the thing that’s missing is that we are still so early. Most people, globally, are not in this space yet and probably still haven’t heard of crypto/NFTs. And if they have, most people think it’s a fad. Even still, if they are curious and try to join, onboarding is kinda hard unless you have a friend to guide you.

Onboarding to crypto is intimidating. There’s this struggle of creating something decentralized but also making it easy to participate. And so that’s one of the reasons why I think there will be a multi- block chain future. And I think that it is perfectly ok and frankly it’s probably needed, just like having centralized organizations like coinbase to onboard fiat swaps or having Opensea as an easy to use NFT marketplace. I’m not saying these are perfect or even my preferred methods, but it’s kinda like iOS versus something like LINUX.

Some people want less ability to customize and some want more - it’s meeting the consumer where they are on their journey, and not imposing that everyone needs to be as learned or sophisticated in order to participate. If the goal for crypto is mass adoption, then to me, it makes more sense that we get people here, even if that means using more centralized chains like Solana or Avalanche or having large marketplaces like Opensea and Nifty Gateway selling the majority of NFT volume. To me, that’s just part of mass adoption and getting more people to use these revolutionary technologies.